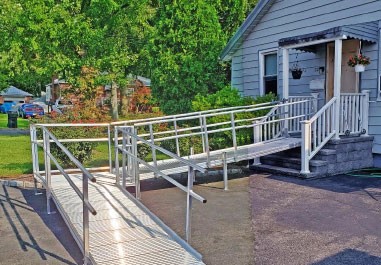 Holocaust survivor, Ida, called Fay Ross, Jewish Family Services (JFS) of Middlesex County's Holocaust Survivor Services Coordinator, with tears in her voice. Ida and Marcus, who live in a two-family home with their son and daughter-in-law had become home-bound. The few steps to exit their home had become too much for them as they became very frail. The difficultly trying to negotiate down the few steps with walkers and canes to go anywhere was hard enough, trying to go back in was even harder.

They started exploring the possibility of constructing a ramp to deal with this situation. The costs were prohibitive, and they felt they had to live with just staying in their home. Ida told Fay she and her husband were becoming very depressed, sad and disheartened. Was there a way JFS could help?

Fay brought this to the attention of the Claims Conference Holocaust Survivors Committee at JFS. The committee, made up of staff members and survivors, reviews emergency situations to find ways to apportion funding, if possible, within the guidelines of the Claims Conference, The Jewish Federation and JFS. They were able to provide funds toward erecting a ramp along with help from Marcus and Ida’s son and daughter-in-law, who could not afford the total cost of the installation.

The ramp was installed. Ida called Fay again crying. These were tears of joy. Ida was so pleased she and Marcus could get out but most of all she was happy because they would be able to attend Café Europa, the monthly lunch gathering for Holocaust survivors, once again.

The Jewish Federation in the Heart of New Jersey is a proud partner of JFS in Middlesex, as well as Jewish Family & Children's Service of Monmouth County, in caring for our community's Holocaust survivors with services such as Kosher Meals on Wheels, in-home aid, mental health counseling, congregant meals, such as Cafe Europa, and more.

If you would like to support all people in need, you may donate where needed most.