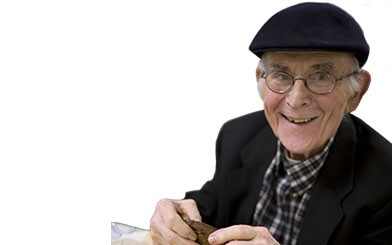 HARRY’S LIFE HAD BECOME LEAN AND LONELY. WE BROUGHT HIM FRIENDSHIP ALONG WITH FOOD IN HIS FINAL YEARS...When Steve first entered Harry’s kitchen as a Kosher Meals on Wheels (KMOW) volunteer, a place set at the table had a sign saying For My Beloved. His wife’s death was just one of many losses leaving Harry frail, broke, and alone.

Harry appreciated the food, often using the chicken to make soup. But it soon became clear Steve’s deliveries were about much more than food. In fact, Steve was there for Harry in his final days.

For hundreds of people like Harry, KMOW delivers sustenance while saying: You are not alone.

Join Us By Taking Action