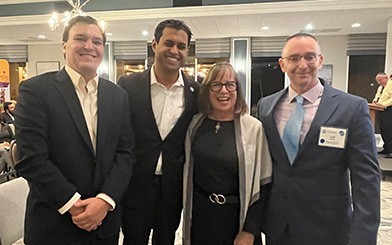 This year as in previous years, reports of antisemitic incidents continued to flow from New Jersey, New York, Florida, and Texas to Italy, Germany, France, and beyond. It seems that antisemitism has become the norm or worse; people are desensitized to it. Federation's Jewish Community Relations Coucil is out there fighting back by putting the needs of the Jewish community in front of lawmakers, testifying before Congress and NJ’s Legislature, drafting language for bills, training advocates, leading missions to Washington, facilitating multicultural programs to build alliances and more.

One of the more aggressive initiatives taken on by JCRC in 2022 was working with NJ Senator Vin Gopal (NJ-11), Senate Education Committee Chair, to strengthen Holocaust and genocide education in New Jersey. Together with members of JCRC and Federation’s Governor’s Council, Senator Gopal drafted S3145, aimed at improving Holocaust education in NJ schools. The bill “requires Commissioner of Education to distribute survey to school districts regarding instruction on Holocaust and genocides” as a first step to making Holocaust education thorughout the state consistent. Federation’s testimony in front of the NJ Senate Education Committee was instrumental in getting the bill passed - the first step to becoming law.

JCRC invested in other projects and initiatives as follows:

Throughout the year, JCRC acted locally to advocate for issues affecting the Jewish community nationwide (and in Israel) by urging Congress to support critical legislation when passing the omnibus spending package for Fiscal Year 2023. As a result, the following are some examples of what was accomplished:

Looking towards 2023 and beyond, JCRC will continue to support and advocate for S3145 and the identical bill in the Assembly, A4720 until signed into law, and work with the NJ Commission on Holocaust Education to ensure that a uniform curriculum is applied statewide. JCRC will continue engaging with anyone that holds a leadership position, government, civic or religious, urging them to take measures against antisemitism and all forms of hate, support basic human service needs for vulnerable populations, as well as work to position the JCRC as a resource in matters important to the Jewish community.

For all that we have accomplished so far, there are still many more projects to undertake. If you want to help with educating our communities, work with youth to help them learn more about antisemitism and how to respond to antisemitic attacks, reach out to contacts you have in community groups, and speak to groups about these topics, then please volunteer to be part of the JCRC.