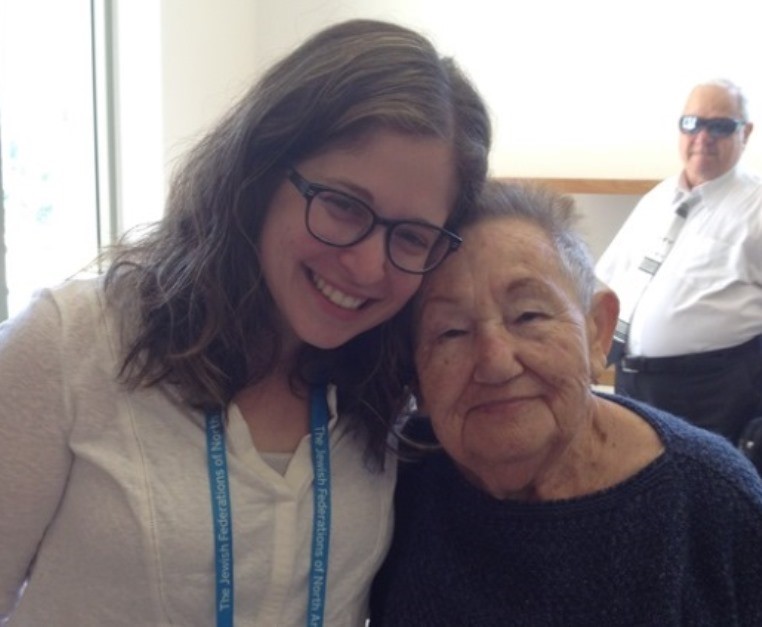 Sarah learned that when Tova was 14, her family was rounded up for transport to Auschwitz – all except one of her older sisters, Yardenna, who had moved to Palestine in the early 1930s with a young Zionist group and became one of the founders of Kibbutz Ein Hashofet.

Tova recalled: “I arrived in Auschwitz but despite being tiny and thin, I managed to avoid the crematoriums. I was assigned to backbreaking jobs like stone quarrying and survived because of my strong will to live, as well as being smart and small.  I survived in all sorts of ways – with tricks I conjured up, by foraging in trash cans for food in the middle of the night, and just making it to the next day.

“Later, I was sent to Dachau.  Due to my nimbleness and with the help of an older German laborer who occasionally slipped me some food, I survived this too.

“When the American air strikes began, the Germans gathered the inmates and started a death march.  Somehow I managed to escape and hid in an empty factory.  After a time, I heard voices speaking a language that did not sound like German.  Instinctively I felt I had to connect with these people.  The windows were very high up.  With great effort, I managed to pile up tables and chairs to reach one.  I broke it with a hammer that I succeeded in taking up with me. I saw that the people were “good” soldiers, I called out for help, and they broke in and rescued me.”

In 1946, Tova set sail from the port of Antwerp with some 500 other ma’apilim (illegal immigrants to Palestine), mostly young orphans. “I met a curly-haired young man with beautiful eyes,” she said. Their boat was seized by the British at the Haifa port and all 500+ passengers wound up in a detainee camp.

“One day, a JAFI activist came to help detainees at the camp and noticed I bore a remarkable resemblance to a woman on his kibbutz.  When he returned home, he told the woman there was someone in the camp who looked just like her.  The woman came to the camp and identified me.  It was my sister, Yardenna.  She asked me to come live with her.  I agreed, but only if my curly-haired boy, who was now my boyfriend – and later became my husband – could also come. Thus my life in Israel began.  Yardenna and I later learned our older sister and brother, Rosie and Shlomo, had also survived the Holocaust and managed to get to Israel.”

Tova regaled the Federation professionals with many more stories. Sarah recalled one Tova’s train ride to Antwerp, when she spotted the female copo who was so brutal to her at Auschwitz.  “It is a story best told in person,” Sarah pointed out, “but let’s just say Tova is one of the bravest and most inspiring people I have ever met.

“Visiting Amigour and meeting Tova during a time of terror clarified Federation’s whole value proposition for me,” Sarah concluded.  “Before my trip began, Federation had already ramped up the Israel Emergency Fund and our local community was responding with tremendous support.  But the day-to-day needs in Israel go on, whether there’s a war on or not.  And Federation is always there to help.

“Perhaps what I’m most thankful for is to be part of a people that care for one another – in Israel, in Monmouth County, or anywhere people in our extended Jewish family need help.  I am also thankful I can help carry the message that supporting Jewish Federation makes a life-changing difference in people’s lives.  Look at Tova.  From her making a life for herself in Israel as a young Holocaust refugee to having a loving and secure home in her later years, Federation – and its partners and supporters – made this happen for her.  I am thankful that I can have impact by supporting Jewish Federation.  I hope you will too.