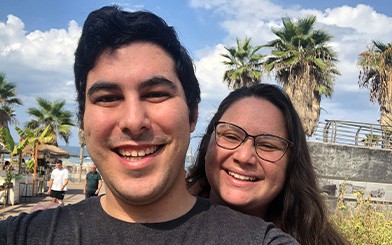 Yafe, beautiful. That’s the first thing that comes to mind when I think about my trip to Israel this October.

From the moment I stepped off the plane, the air felt different – humid, but comforting. The hills were towering, yet familiar. There was something special about this place.

I spent the first night in Tel Aviv with my partner, a South Jersey native and first-year rabbinical student at Hebrew Union College - Jewish Institute of Religion. As the sun began to set, we grabbed dinner, traversed the streets of Tel Aviv, watched some of the locals play volleyball on the beach, and reminisced in disbelief that we were finally together after four months apart. It was a magical moment that only felt possible in that place, at that time, with that person. 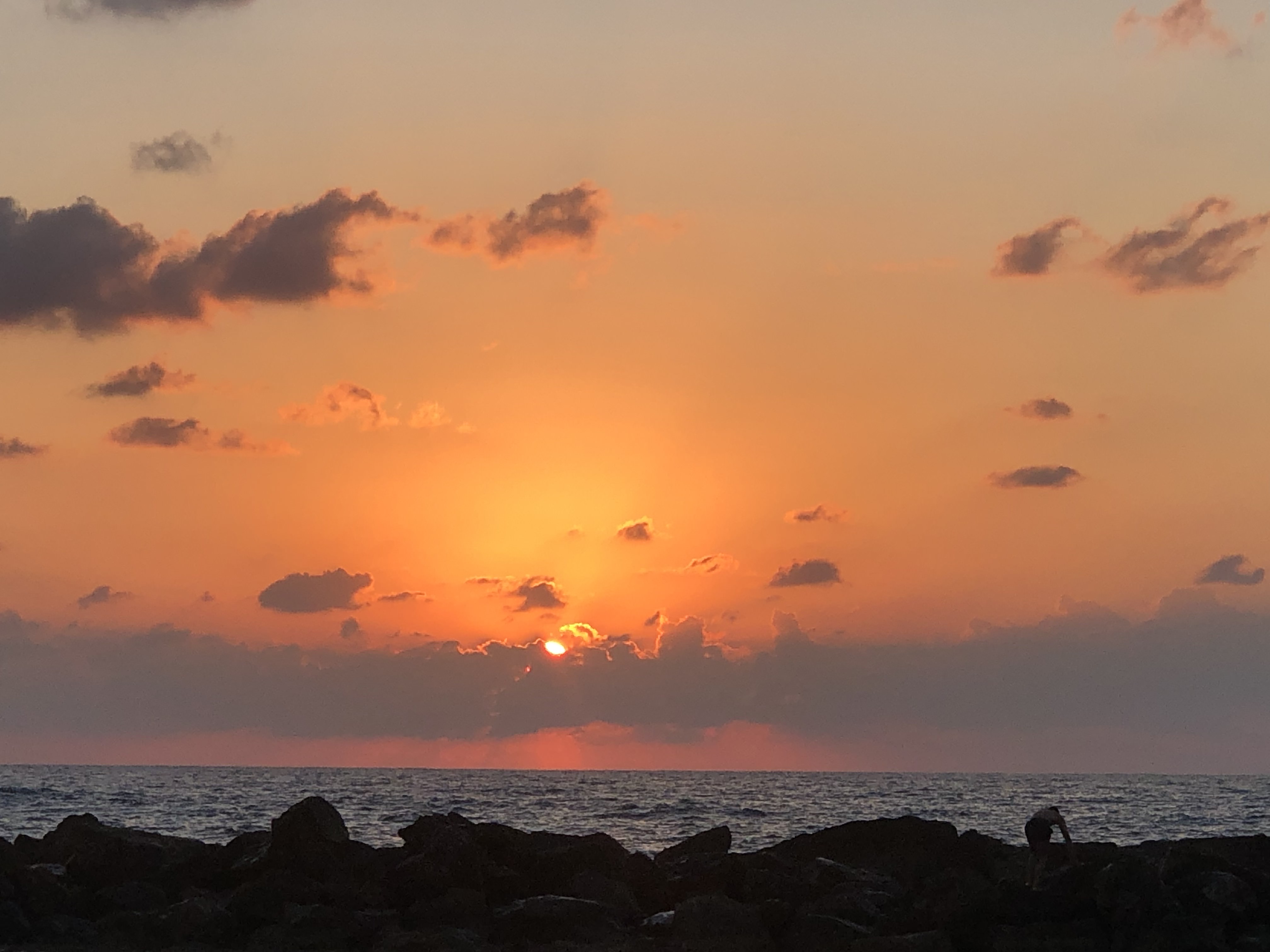 The next day we took the train to Haifa and met up with some of my partner’s rabbinical and cantorial classmates for a beach vacation. That night, we cooked a big meal and came together to say the blessings for the meal, lulav, shehecheyanu, wine, and sitting in a sukkah. The image of eight future clergy members observing our shared tradition and culture was deeply impactful.

I woke up the next day to the sound of waves crashing against the shore. We quickly prepared breakfast and spent the next six hours baking in the sun, stopping only briefly for a quick lunch. In the evening, we cleaned up and headed to downtown Haifa for dinner at a beautiful Mediterranean restaurant. The whole day reminded me of how profoundly normal Israel is. The waves of the Mediterranean Sea were just as rowdy as the waves of the Atlantic Ocean and the stars glimmer as brightly in Haifa as they do in New Brunswick – if not more.

We spent our final day in Haifa taking in the beautiful view before cleaning up the apartment and heading home to Jerusalem.

In Jerusalem, we traveled all around the city center – from Ben Yehuda Street to the Shuk – walking and taking the bus everywhere we went. I was once again struck by how profoundly normal the city felt. Here I was, walking the same land that my ancestors walked thousands of years ago, yet my environment reflected that of a sprawling suburb.

One night, I met up with the entire class of first-year rabbinical and cantorial students from HUC for a classic American tradition, pizza in the sukkah. Each member of the group – two of whom were from Middlesex County – came from a different walk of life with their own identity, traditions, and lived experiences and I was delighted to meet them. We closed out our meal by loudly chanting the Birkat Hamazon, an experience that had uniquely more meaning because it happened in that place and with those individuals. It was yet another rare moment of pure Jewish joy.

Another night, I traveled to the city of Ra'anana for a family dinner with over 30 of my Israeli cousins, their children, and Russian immigrants who were recently discovered to be distant relatives of mine. It was truly wonderful to reconnect with family that I haven’t seen in years, but I think the most meaningful moment was getting a chance to speak with my new relatives.

The mother of the Russian family told me how she and her husband fled their home in Russia and made Aliyah to Israel. The war made her hometown too dangerous, and she had to choose between living in constant fear or joining her son, who had already made Aliyah, in Israel. She chose family over fear. This was particularly impactful for me as a Federation professional because our Annual Campaign supports the infrastructure that enables the Jewish community to respond from a position of strength to the Ukraine war and other crises

I’ve always found Shabbat to be particularly calming because of our inherent commandment to step back, relax, and appreciate all that we have been given. Shabbat gave me a chance to reconnect once again with my partner on both a spiritual and emotional level in a way that, yet again, wouldn’t seem possible at any other time and in any other place.

On Friday night, my partner and I traveled to one of the few synagogues affiliated with the Israeli Reform Movement in Jerusalem. The synagogue was particularly interesting because it attempts to reconnect secular Israeli Jews with their faith by introducing them to a progressive form of Judaism. Services were held outside in a sukkah and accompanied by a cool breeze. I finished the night by cooking Shabbat dinner and we spent the rest of the weekend relaxing and enjoying our time together.

As Shabbat and my trip to Israel ended, two things came to mind: 1) I am lucky to be surrounded by people who love, appreciate, and care about me 2) Everyone should have the opportunity to experience this beautiful, thriving, democratic country in the same way I have been blessed to experience it.