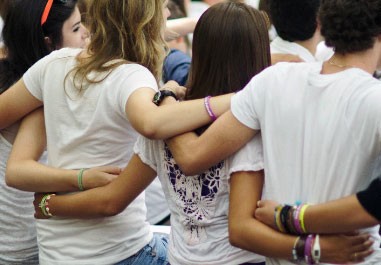 Jordan liked attending Shabbat services with her dad. Until one day, she was asked to leave – and not come back. She liked palling around with the kids at Hebrew School – then one day, she learned she would not be going back.  …We simply can’t meet her needs, Jordan’s parents were told. Having a neurological disorder known as Tourettes, she was prone to verbal outbursts, or tics as they’re called, at unpredictable times.

Jordan was a fun, social kid. She liked to be part of things. She wanted to go to the Jewish sleepaway camp she’d heard kids talking about in Hebrew School. Her parents cautiously agreed.

Day one, sitting with her bunk mates, and surrounded by some 200 other exuberant campers at an assembly, Jordan hung on every syllable as the director bellowed, “Welcome to summer, 1996.” He urged the kids to settle down, which they finally did. At that very moment, Jordan Pamela began to curse loudly.

Heads turned. Laughs erupted. Jordan was scolded. Then she bolted from the gym.

The director handed off his microphone, and rushed outside to find her sitting in the gazebo.

In 1996 there was not the same familiarity with caring for people with special needs as there is today and somehow the director hadn’t been made aware that a first-time camper had Tourettes.  Fortunately, his nurturing instincts automatically kicked in and he enveloped Jordan in understanding and support. He assured her the camp family would accept and embrace her – and that’s exactly what they did for the next 4 weeks of the summer – as well as all 8 weeks the following four summers Jordan attended camp.

20 years later, Jordan remembers how the director’s reassurance became reality. She remembers dancing barefoot to Israeli folksongs and singing at the top of her lungs to welcome Shabbat. She recalls colorwar, and late-night talks with bunk mates.

She loves that a hallmark of Jewish camps – whether they’re all-around camps or specialty camps for sports or the arts or adventure or computers – is that there is a place for all kinds of kids to thrive. She knows the key to a strong Jewish future is valuing diversity.

Jordan knows that camp is one of the best ways to inspire kids to embrace their place in Jewish life as they grow into adults – not just because all the studies say it does, but because she lived it herself, and she’s witnessed so many others living it ever since.