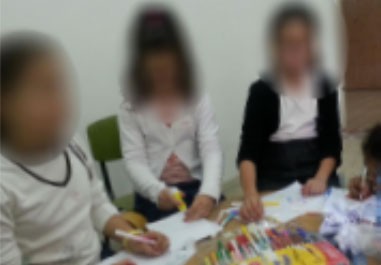 This Federation looks to fill unmet needs in Jewish life – especially caring for the vulnerable among under-served populations. In Israel this year, we supported long-standing partners, The Jewish Agency for Israel (JAFI) and the American Jewish Joint Distribution Committee (JDC), as well as making 19 targeted overseas grants.
Our grant recipients care for people living on or near the poverty line, with a concentration on children and at-risk youth. One such person was 10-year old  Avigayil. Through your support and our Federation grant, we changed her life. Here’s how:
Recently, the term sexual assault, once uttered only in whispers, became a major media topic. Beyond celebrity and political culture, where much of the news was centered, victims of these heinous acts included Jews… Jews in Israel… even observant Jews in Israel.
One such person, living in a small town, was 10-year old Avigayil – and she had a terrible secret. Avigayil’s uncle, who everyone loved, had been molesting her for years. She dreaded his visits but couldn’t tell anyone because no one would believe her. According to Debbie Gross, Director of the Tahel Crisis Center, victims like Avigayil, torn between ending their nightmare and bringing shame to themselves and their families, rarely report abuse.
Israel’s only rape crisis center specializing in working within religious communities, Tahel began with one hotline. Now, thanks in part to support from the Jewish Federation in the Heart of NJ, it also conducts safety and prevention workshops in schools throughout Israel. That’s how Avigayil learned the difference between a good secret and a bad one – and how to share bad secrets with an adult who listens.
Shortly after the workshop in her classroom, she gathered the courage to confide in her best friend’s mother, who alerted Tahel. The Tahel team helped Avigayil and her family through all that followed. Soon after, the uncle was arrested and Avigayil and her parents continue to receive support from Tahel.
Abuse can happen to anyone. If you or someone you know has a terrible secret, contact Jewish Family Services of Middlesex (732) 777-1940 or Jewish Family & Children’s Service of Monmouth (732) 935-1881.
On November 18th, 2020, Jewish Telegraph Agency published a story on Tahel, an organization that Federation has funded, applauding the organization for its continued good work. Please click here for more:
This American immigrant to Israel is fighting sexual abuse among the Haredi Orthodox

A Statement: Current Situation in Israel

JFHNJ on the Death of Sarah Halimi