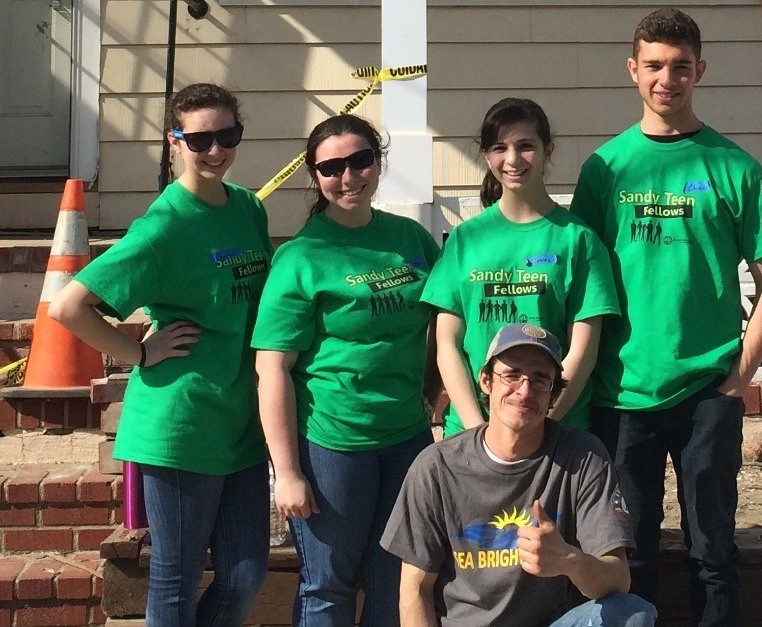 “It’s been really moving,”15 year old Jenna said about doing demolition and construction. Jenna participates in the selective Sandy Teen Fellows leadership training program, which engages Jewish teens in learning about social action and helping families displaced from their homes by super storm Sandy. The teens examine the Sandy crisis and its aftermath through a Jewish lens, do hands-on community service, make new friends, and amass service credits to satisfy school and college application requirements. But for Jenna the attraction was much more personal.

After the storm, she was forced to leave her own Sandy-torn home; aid volunteers came to help clear debris from her yard and she longed to reunite with her pets, who had to go live in a shelter far from home. During a fellowship recruiting session at her synagogue, Jenna relived the months her family stayed with her grandmother, moved in with friends, went to a rental, then to a different, more affordable, rental where she lived at that point.

“Right after the storm everyone would ask me, ‘Are you OK?’ but after a while they stopped asking.  I know how that feels and I’m really glad I can help others in the same boat.”

One day doing demolition in a home in Sea Bright, Jenna’s 10-person work crew of Sandy Fellows (there are 45 Fellows who do construction in groups of 10) found mold.  The adult construction supervisor stopped the demolition, had everyone put on protective gloves and respirators and instructed them how to switch gears to mold remediation.

“It took all ten of us practically a full day,” Jenna said.  “When we were done, the supervisor told us what we had done would have cost the homeowner nearly $10,000.  I felt so proud that we could do that for her.”

Jenna reports having done some community service before Sandy Fellows, but says she’d never made a connection between service and Jewish teachings. Each month the Sandy Fellows gather for learning about leadership, social action, and philanthropy.

“One night we learned what Maimonides said about the levels of tzedakah and it all made sense with  what we are doing in Sea Bright,” said Jenna.  “We can relate to him now.”

The teens learned more about philanthropy the night they allocated a portion of funds the Jewish community had raised for storm victims. Jenna described it as “a lot of responsibility,” but one that added to her feeling “empowered.”

“One thing I’ve realized from being in Sandy Teen Fellows is when you are in a time of need, there is a community around you that’s willing to help. You don’t have to be afraid to ask.” She went on to say she would like to get more involved in community activities in the future.

“We could all do a little more, and I feel like I should be the one to take the first step.”