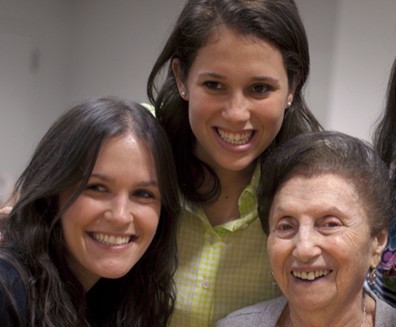 16-year-old Reva tried to stay invisible until Federation programs inspired her to step up and speak up for herself — and others.

JTeam and JSERVE inspired Reva to take her place in a community thriving together.

The teen years can be brutal. Reva coped by not calling attention to herself. “I was the one who sat behind my friends, so they would talk and I could just be ignored.” This began to change one day at a meeting of JTeam teen philanthropy, a program of The Jewish Federation in the Heart of New Jersey. Reva’s group did not show up that day and she had to make their presentation. “I was always the quiet one, but I had to do it,” she recalls.

A few weeks later, Reva’s friends convinced her to join them and 150 other teens at JSERVE, the national day of teen service, also sponsored by the Federation. She went, reluctantly.

When asked to take a leadership role at JSERVE, Reva recalled surviving the JTeam presentation a few weeks before, and rose to the occasion. Before long, Reva was the one at the front of the room helping her peers choose service projects for the morning -- to help people who are hungry, homeless, or alone. Reva explained there are people who can’t afford basics like soap and shampoo; the kids could bag toiletries for them. She described seniors without family nearby who never get company; the kids could go visit them. Another project was knotting quilts for people at Elijah’s Promise homeless shelter. The quilts, she said, would bring them some comfort. Other options included making care packages for U.S. soldiers and wrapping supplies for families of cancer patients staying at Ronald McDonald House.

As Reva took her place among the volunteers, she realized everyone was there to support a community thriving together: teens with seniors, Jews and non-Jews, Federation with partner agencies, and volunteers from Monmouth and Middlesex counties. She felt proud that she helped make it happen.

The afternoon session had even more impact on Reva. It was led by a speaker only slightly older than she, who talked about what it’s like to be in Israel’s armed forces. He represented Stand With Us – an organization that seeks to combat anti-Israel sentiment with education.

As the speaker talked about decisions Israeli soldiers make every day, some involving life and death, Reva realized, “They’re practically my age.”

She found herself feeling much deeper empathy for her Israeli peers and suddenly, words started tumbling out of the mouth of this usually silent person. A few weeks before at JTeam, she had reluctantly presented her group’s presentation; that morning at JSERVE, she tentatively helped her peers pick their service projects; now, her friends could hardly believe how passionately she was speaking out about Israel.

“I went to JSERVE because my friends basically dragged me,” Reva said. “I can’t wait to do it again.” Now Reva wants to develop her new-found voice to advocate for Israel so she can correct the misinformation behind boycotts, divesting from, and sanctioning of Israel. By taking part in JTeam and JSERVE, Reva discovered she can make a difference – using her hands and her voice – on behalf of others. With a boost from the Jewish Federation’s teen leadership programs, Reva and others like her are impacting the Jewish community from New Jersey to Israel on a daily basis.

JSERVE and JTeam, along with the Sandy Teen Fellows, are programs of The Jewish Federation in the Heart of New Jersey. They represent just a few ways the Federation focuses on and expands opportunities to cultivate teen leadership and inspires the next generation to embrace Jewish life.

Support programs like these.
Make a donation to the Jewish Federation.
Thank you for your generosity!

The newly merged Jewish Federation in the Heart of New Jersey serving Monmouth and Greater Middlesex counties is committed to caring for the vulnerable, locally and worldwide, forging strong connections with Israel and communities overseas, attracting people to a more vibrant community, and inspiring the next generation to embrace Jewish life. The public is invited to JTeam’s 2015 graduation June 18. For more information, contact the Federation.

Stay tuned for next week’s IMPACT story about the power of a child with special needs to inspire his family and his community.